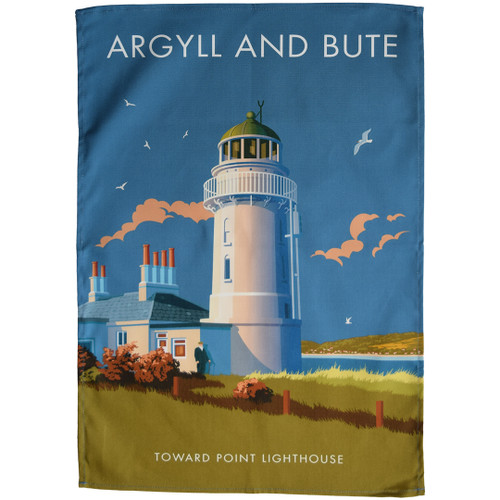 Rivers are strange and mythical things. Ancient Romans believed that the god Volturnus controlled the rivers. In Egypt the Nile was presided over by several divine figures. And even in British Folklore we have Old Father Thames. So it’s no surprise to know that the Clyde is named after the local Celtic goddess Clôta – a name which literally means ‘the strongly flowing one’.

The second longest river in Scotland, the Clyde has always been an important trading route. And as traffic on the Clyde increased, so too did the need for lighthouses. Without them, ships would run aground or be wrecked on jagged rocks. That’s why, in 1812, at the height of the Industrial Revolution, a lighthouse was built on the southernmost point of the Cowal Peninsula – it’s called Toward Point.

This design shows Toward Point Lighthouse towering above the shore, overlooking the widening mouth of the Clyde. Sunlight catches the edges of clouds; the lighthouse keeper stands at the door; seagulls flit and circle overhead – a beautiful scene to enjoy as you dry the dishes.

Half Panama organic bleached cotton (heavy weight, textured finish). Stitched on all four sides. Includes hanging loop. Measures approximately 48cm x 70cm. Machine wash at 40 degrees max. We recommend that before you use your tea towel for the first time you wash it at least once to soften up the material and make it more absorbent for drying dishes. Please note size can vary slightly.
×