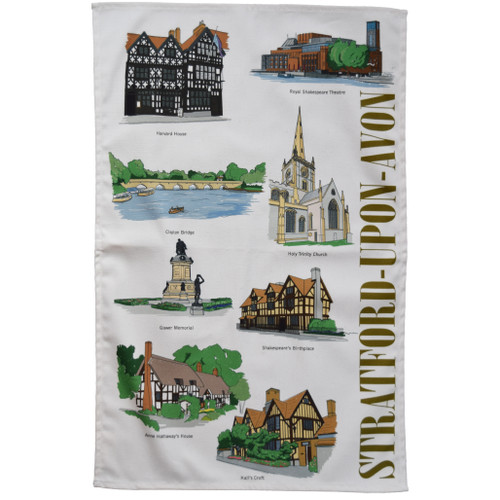 You would be hard pressed to make a tea towel dedicated to the market town of Stratford-upon-Avon without mentioning William Shakespeare. It is the enduring popularity of the great British playwright that has brought fame to the town as a tourist destination, both through the landmarks associated with him and the theatres which show his plays to this day.

If it’s history, rather than theatre, that interests you then why not visit the 16th century, half-timbered house in the town centre believed to be the spot where Shakespeare was born in 1564? It is truly a mecca for all lovers of literature. In fact, the town remains a unique place because it exhibits so many 16th and 17th century houses, containing numerous artefacts of the Shakespearean age. Halls Croft, the building owned by Shakespeare’s daughter, and Harvard House or Anne Hathaway’s house are both timestamps of the Tudor era, with visible timber framing on the exterior, so typical of the times.

Yet if you have somehow stumbled into Stratford-upon-Avon with no interest in the theatre, do not fear! Clopton Bridge, with its 14 pointed arches spanning the River Avon, is a sight to behold. Or Holy Trinity Church, which found fame as the place of baptism, marriage and burial of Shakespeare (sorry there’s no escape!), and dates back to the 13th century.

So yes, Stratford-upon-Avon is steeped in the history of Shakespeare but it also offers much, much more.