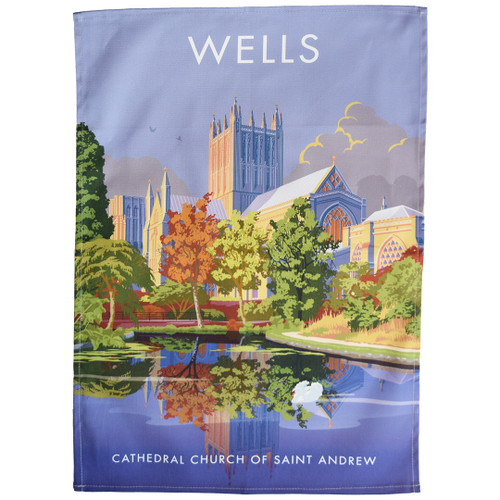 Ahh, Wells: there’s really nowhere like it. Nestled on the southern edge of the rolling Mendip Hills, Wells may be England’s smallest city, but it has a heck of a lot of history! The city takes its name (unimaginatively) from the three well springs dotted around the city. It was these wells that drew the Romans here two thousand years ago, building temples dedicated to the deities of the springs. And when Wells became a prominent centre under the Anglo-Saxons, the city grew with the springs at their heart, with the new Cathedral and Bishop’s Palace just a stone’s throw away.

To this day, the Cathedral is still the city’s biggest landmark. Built in the twelfth century, the Cathedral has seen a solid amount of drama in its time: when Wells was sieged by Parliamentarians during the Civil War, Roundhead troops turned the nave into a stable. Apparently they even used the cathedral’s sculptures for firing practice!

This stunning design shows the Cathedral’s south-east end from the beautiful gardens of the nearby Bishop’s Palace. Alec Clifton-Taylor called it one of the ‘most poetic’ Cathedrals in England, and it’s easy to see what he meant: the cathedral’s warm Doulting stone catches the evening light perfectly. In the foreground is one of the well springs after which the city is named, with a white swan gliding over the surface – the perfect scene to enjoy as you dry the dishes!

Ely Cathedral - the Ship of the Fens tea towel

Ely Cathedral - the Ship of the Fens tea towel