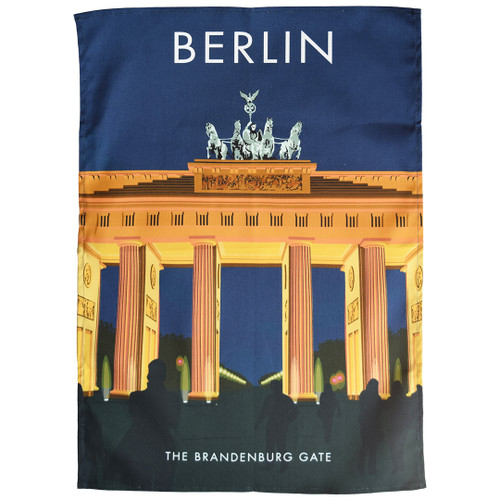 Of all the monuments in Europe, the Brandenburg Gate in Berlin has to be one of the most historically important. Built in 1791 by the Prussian king Frederick William II, it's a wonderful example of neoclassical architecture - hence the temple-like pillars and the sculpture of the Roman goddess Victoria.

It really is a stunning landmark, so it's no wonder it's played such a significant role in history. When the Nazis came to power, the gate became a Nazi symbol and was permanently hung with red Swastika flags. And when the Berlin Wall was built in 1961, the gate was closed for almost thirty years, and nobody was allowed to pass through its arches. It was here that Ronald Reagan gave his famous Berlin speech, telling Mikhail Gorbachev to 'open this gate' and to 'tear down this wall'.

Despite its turbulent and painful history, the Brandenburg Gate is now seen as an important symbol of peace and freedom in Europe - a symbolism that this tea towel celebrates.