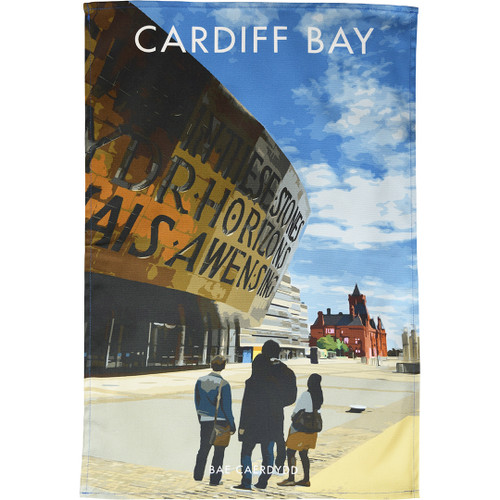 Cardiff Bay was once the industrial heart of the Welsh Capital: coal from the South Wales Valleys would travel through the docklands on its way to the rest of the world. But in the years following World War Two, the docklands became increasingly neglected as the Welsh coal-mining industry began to dwindle, and by the 1980s, the place had become a wasteland of mudflats and derelict buildings.

But then, in the 1990s, the docks became the site of one of Europe’s largest ever waterfront developments. A barrage was built across the mouth of the Bay, turning the tidal mudflats into a large freshwater lake, and the rapid regeneration of the area followed. Today, it’s a bustling urban area with anything you could wish for, from restaurants and shops to arts centres and historic buildings. It’s also home to the Senedd building, built in 2006 to house the debating chamber and committee rooms of the Welsh Parliament.

This design shows Cardiff Bay on a bright summer’s day. In the background is the magnificent Pierhead Building, and in the foreground is the Wales Millennium Centre, a huge theatre and concert venue which opened in 2009. Its iconic bronze-coloured façade is inscribed with words written by the Welsh poet Gwyneth Lewis: 'Creu Gwir fel Gwydr o Ffwrnais Awen' which translates as 'Creating truth like glass from inspiration’s furnace’ but which is transcribed on the building as 'In these stones horizons sing'. The perfect inspirational message for your kitchen!