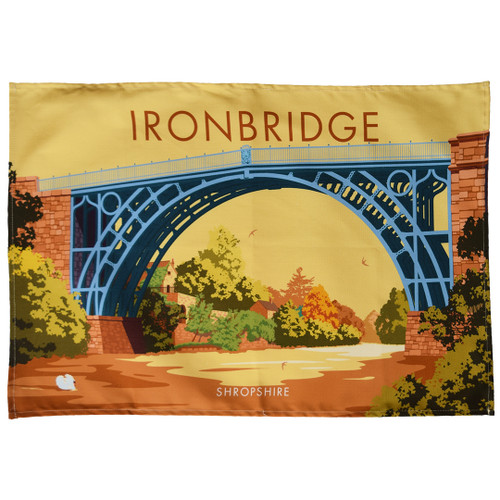 On the bank of the River Severn, Ironbridge is a large village nestled in the heart of Shropshire. The town is named after its most famous landmark, The Iron Bridge, a cast iron bridge that spans – you guessed it – the aptly-named Ironbridge Gorge! But Ironbridge is famous for another reason too: this was one of the birthplaces of the Industrial Revolution, and it was here that Abraham Darby perfected the technique of smelting iron with coke.

It was his grandson, Abraham Darby III, who built the 30 metre bridge in 1781 – the first major bridge in the world to be made of cast iron. Given the number of floods on the Severn, it’s testament to the strength of the bridge that it has survived so long! By the 19th century, the Iron Bridge had become a national treasure, a symbol of the Industrial Revolution. Visitors came from across the country, including the Prime Minister Benjamin Disraeli. Since then, the Ironbridge Gorge has been designated a UNESCO World Heritage Site, making it a major tourist attraction.

This design shows the beautiful curved arch of the Iron Bridge sweeping over the gorge, the banks of the river lined with trees and shrubs. A swan paddles in the river, and swifts dart about overhead. Go on: celebrate the Industrial Revolution with this beautiful tea towel!