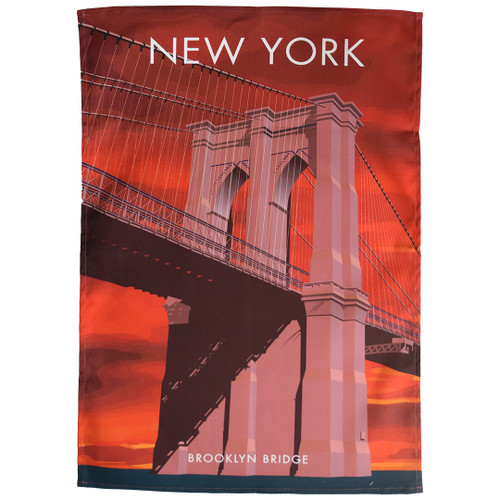 The Big Apple. The Gateway to the West. The City that Never Sleeps. What is there to say about New York that hasn’t already been said? It’s the city that everyone’s heard of, the streets that everyone’s seen on the big screen. And along with the Empire State Building, the Brooklyn Bridge is one of the city’s most iconic landmarks.

Spanning the East River between Manhattan and Brooklyn, the Brooklyn Bridge was the longest suspension bridge in the world when it first opened. Just over a mile long, and with 83 metre tall towers, it’s no surprise really that it took so long to build – construction started in 1870, but the bridge didn’t open until 13 years later in 1883. Since then, it’s featured in countless films and TV shows and is now a major tourist attraction, with over 10,000 pedestrians walking across it on an average weekday.

This stunning design shows Brooklyn Bridge from the river bank, framed by a deep red sunset spread across the sky. The stocky suspension tower, with its characteristic Gothic arches, looms over the ever-flowing river. Go on – pay tribute to a classic New York symbol with this striking tea towel!