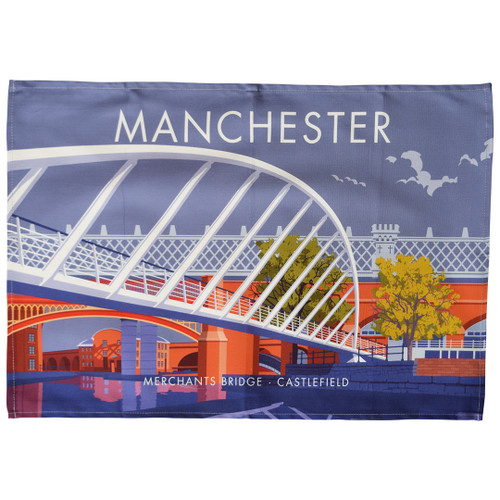 Weaving together the many strands of its long and exciting history, modern Manchester is a rich tapestry of old and new, industrial and metropolitan. From Roman ruins to sky-scrapers, Gothic churches to 19th century mills – Manchester has it all. And Castlefield is where those disparate elements come together most strikingly. Once the centre of Industrial Manchester, warehouses and cotton mills line the banks of the Bridgewater Canal, and four large viaducts span the basin. Since the deindustrialisation of the area in the twentieth century, Castlefield has become a bustling centre for the city’s nightlife, known for its edgy bars and sophisticated restaurants.

Built in 1996 in white-painted steel, the award-winning Merchants Bridge is one of Castlefield’s many iconic structures. Its elegant arch sweeps over the Bridgewater Canal, strikingly distinct from the red brick buildings that surround it. Maybe it reminds you of the Millennium Bridge in London, or the huge arch that curves over the roof of Wembley stadium – but the Merchant’s Bridge in Manchester is older than both of them. And if it’s good enough to win awards, well it’s good enough for a tea towel!

Half Panama organic bleached cotton (heavy weight, textured finish). Stitched on all four sides. Includes hanging loop. Measures approximately 48cm x 70cm. Machine wash at 40 degrees max. We recommend that before you use your tea towel for the first time you wash it at least once to soften up the material and make it more absorbent for drying dishes. Please note size can vary slightly.
×