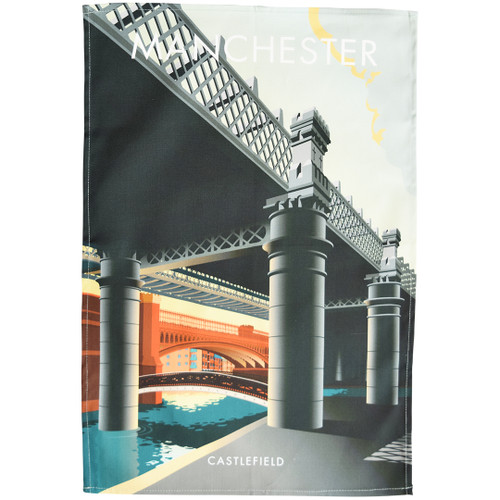 Weaving together the many strands of its long and exciting history, modern Manchester is a rich tapestry of old and new, industrial and metropolitan. From Roman ruins to sky-scrapers, Gothic churches to 19th century mills - Manchester has it all.

Castlefield is where those disparate elements come together most strikingly. South-west of the modern city centre, this was the heart of Roman Mamucium, a fort dating back to AD 79. But it was also the core of Industrial Manchester. Warehouses and cotton mills line the banks of Bridgewater Canal, and four large 19th century viaducts span the basin. Since the deindustrialisation of the area in the twentieth century, Castlefield has become a bustling centre for the city's nightlife, known for its edgy bars and sophisticated restaurants.

This design shows the underside of the 1893 Great Northern Viaduct, famous for its massive cast iron cylinders - each thirteen feet wide at the base. In the background is the iron arch of the red brick viaduct, built even earlier in 1849. No matter how the city changes, these huge landmarks will always tell the story of Manchester's industrial past - and this tea towel is a testament to the importance of that history.