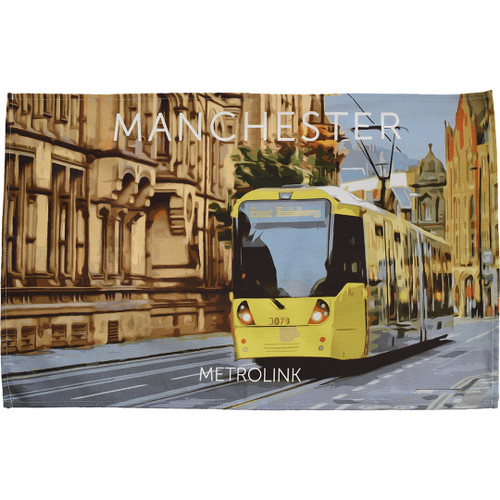 No trip to Manchester would be complete without a ride on the Met! With over 99 stops and eight different lines, the Manchester Metrolink is the most extensive tram system in the UK. From Didsbury to Rochdale, Salford to Bury, the Met knits together the various boroughs of Greater Manchester with its whopping 103 kilometres of track.

First thought up in the 1980s and finally opened in 1992, the Metrolink is actually relatively new compared to a lot of other public transport systems around the world. But the history of tramways in Manchester goes back a lot further: electric trams had previously operated in Manchester from 1901 to 1949, and before that the streets were full of horse-drawn trams as well. So the bright yellow trams of the Metrolink are actually part of an age-old tradition!

Over the years the Manchester Metrolink has become a much-loved icon of the city – one that we’ve chosen to celebrate with this stunning tea towel! Know any tram-fanatics? Well this is the gift for them!