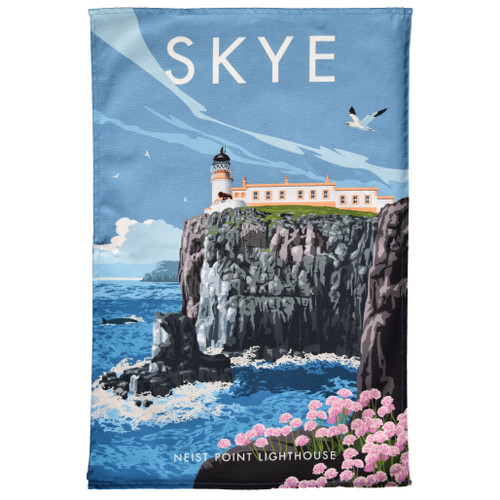 At the most westerly point of Scotland’s Isle of Skye sits one of its most iconic spots: Neist Point Lighthouse. First lit in 1901, Neist Point has been a beacon into the stretch of luscious waters that bridge Skye and its island neighbours for generations. It is also a symbol of an Island which epitomises Scotland’s wild landscapes; as the largest island in the Inner Hebrides archipelago Skye contains the full set of naturally formed and idiosyncratically Scottish treasures: lochs, indented coastlines and centuries old fishing villages, all protected by the careful watch of Neist Point.

Not only does Skye boast some of the most immense landscapes in the British Isles, but it is also home to some of its best wildlife. The northern gannet, depicted on this design, is the largest sea bird in Scotland and can often be seen hurling itself into the nutrient rich waters. Also depicted is the killer whale (or orca) which is equally, if not more impressive, though somewhat harder to spot because of the large distances it covers in order to track down prey. Skye is just one calling point in their search for seals or other fish.

Skye itself is not for the faint hearted, but this design will transport the sound of sea birds calling and waves crashing into the coastline right into your kitchen.