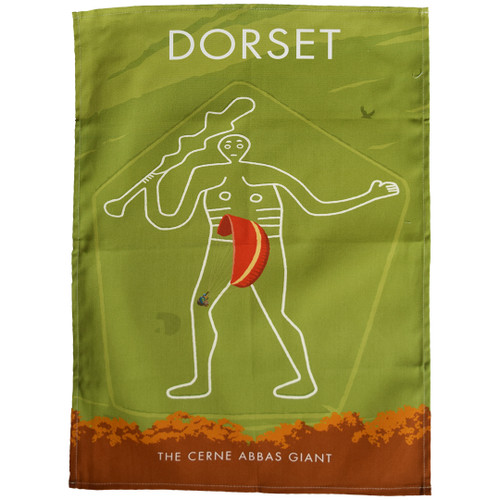 Fifty-five metres tall; fifty-one metres wide. It's one of the biggest landmarks in Dorset - but if you're not in the right place you might not even see it. Cut into the steep western flank of a hill, the Cerne Abbas Giant is one of England's best known hill figures, outlined by shallow trenches filled with chalk rubble. The knobbled club in his right-hand is a whopping 37 metres long!

So we know how big it is and what it looks like, but what exactly does it depict? Well, that's harder to say. Some say it depicts Hercules. Others that it may be a parody of Oliver Cromwell. Or maybe, as some folklore suggests, this is actually a burial site, and the figure is a sort of gravestone - an outline of the real giant buried beneath the earth! Either way, the giant has become a local symbol of fertility, gaining particular notoriety for its prominent - well - nudity.

This design shows the Cerne Abbas Giant from above, with a parachute floating conveniently over the Giant's notorious member. Anyone with a passion for British folklore is sure to fall in love with this tea towel!