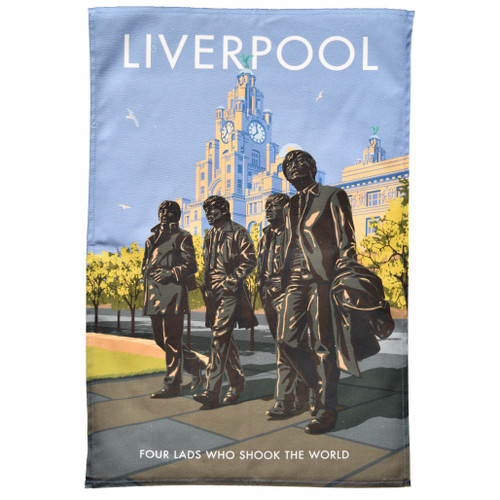 Liverpool is a city bursting with culture and identity. Whether it’s football, art or music, the city has produced some of the greatest cultural icons Britain has ever seen. None have been more prolific, or cutting-edge in their field, than the “Fab Four”. The Beatles.

Taking Britain, and then the world, by storm, The Beatles’ international fame did not stop an increasingly experimental and groundbreaking musical development through the latter stages of their time together. Just one reason they remain one of the most influential bands in history. Somewhat surprisingly, the “Fab Four” statue depicted in this design was only erected in 2015 at the Pier Head in Liverpool – the cultural hub also home to the Merseyside Maritime Museum and the Tate.

Yet this design is not just a homage to The Beatles or the Pier Head scene it captures. It is a celebration of Liverpool’s identity to which artists like The Beatles owed so much. The Liver Bird, which sits upon the Liver Building, watches over the Fab Four, just as it does the city. Now that iconic bird, along with John, Paul, George and Ringo can watch over your kitchen whilst you dry your dishes too!