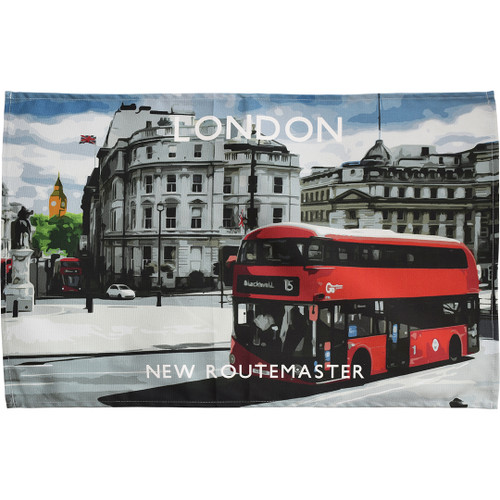 In 1907, the London General Omnibus Company decided to paint its whole fleet of buses bright red. Since then, the red London bus has become a symbol of the city, depicted on t-shirts and posters the world over. And of all the models of red bus that have navigated the capital’s streets, the Routemaster is without a doubt the most iconic, with its half-cab and open rear platform. Dating back to 1954, the Routemaster was voted one of Britain’s top 10 design icons in 2006. So popular was the Routemaster that, not long after it was decommissioned in 2005, it was redesigned in 2011 in the form of the New Routemaster – a double-decker bus inspired by the original, albeit with a full front end and a door on the rear platform.

This stunning tea towel features a classic London scene: the New Routemaster in Trafalgar Square, with Union Jacks flying in the background and Big Ben rising in the distance. The perfect gift for a lover of all things London!