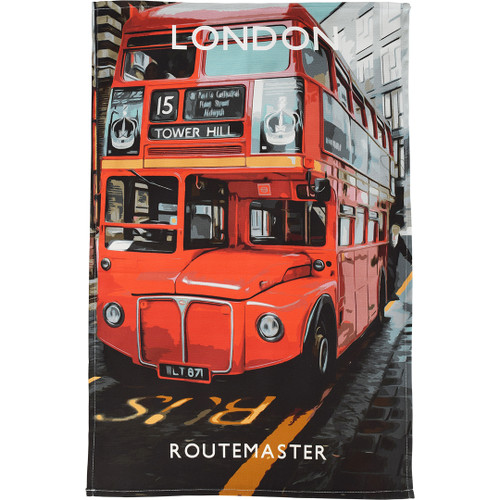 In 1907, the London General Omnibus Company decided to paint its whole fleet of buses bright red. Since then, the red London bus has become a symbol of the city, depicted on t-shirts and posters the world over. And of all the models of red bus that have navigated the capital’s streets, the Routemaster is without a doubt the most iconic, with its half-cab and its open rear platform. Dating back to 1954, the Routemaster was voted one of Britain’s top 10 design icons in 2006.

This design shows the Routemaster in action on heritage route 15 to Tower Hill. Though now decommissioned and replaced by the New Routemaster, this classic bus can still occasionally be spotted around the city as part of museum events or chartered services. Want to celebrate London’s transportation heritage? Then this tea towel is just the thing for you.